The Cotswolds is a beautiful area in the Southern half of England, UK. Famous for the honey-coloured Cotswold stone cottages and houses, picturesque villages, bustling market towns and stunning countryside of rolling hills. Throughout the Cotswolds you will find impressive architecture and imposing houses. Castles to visit include Sudeley, Berkely and Kenilworth. Just 40 minutes away is the stunning Blenheim Palace at Woodstock as well as character properties like Sezincote, Snowshill Manor, Stanway House, Charlecote Park and many more.

The name ‘Cotswolds’ is believed to derive from the term ‘cot’ meaning sheep enclosure, and ‘wolds’ meaning hill – and there are plenty of hills! The area is famed for its historic wool trade. The native breed of sheep is known as the Cotswold Lion due to its white face and long, golden fleece. 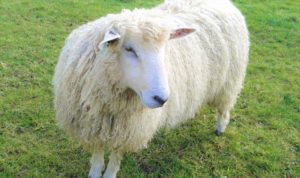 The Cotswolds has a reputation for being a wealthy area – largely because of the medieval wool trade. The wealthy wool merchants began building lavish houses and generously contributing to the churches in the area. These churches that were built or enlarged through such contributions became knows as ‘Wool Churches’. Examples include Chipping Campden, Winchcombe, Cirencester, Northleach and Fairford.

The natural landscape is ideal for sheep farming and the Cotswolds also became known for the quality of its woollen cloth. There were over 150 mills in the area, especially around Stroud and South Gloucestershire. Ultimately much of the wool trade moved to the North of England, causing economic depression in the area. 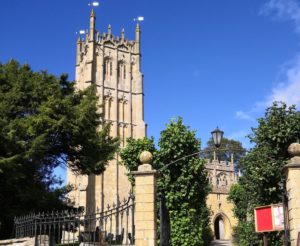 The countryside is open, varied, and certainly hilly and offers over 3,000 miles of footpaths. There are 2 national trails, The Thames Path starting in the south Cotswolds and The Cotswold Way which stretches 102 miles (164km) between Chipping Campden and the city of Bath, an UNESCO World Heritage Site.

The Cotswolds is designated an Area of Outstanding Natural Beauty. It is in fact the largest in England and Wales at almost 800 square miles, which is around 25 miles wide and 90 miles long. It runs through the 5 counties of Gloucestershire, Oxfordshire, Warwickshire, Wiltshire and Worcestershire. The highest point is at Cleeve Hill near Cheltenham, standing at 1,083 feet (330m). 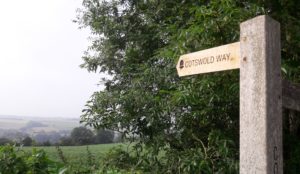 The Cotswolds became an important centre for the Arts & Crafts Movement in the early 20th century. The movement was an international trend in the decorative and fine arts. It stood for traditional craftmanship using simple forms, and often used medieval, romantic or folk styles of decoration.

William Morris, a British textile designer, poet, novelist, translator and social activist, moved from London to Lechlade in 1871. Other makers soon followed and Craft communities developed. C R Ashbee’s Guild of Handicraft – over 50 craftsmen and their families – moved to Chipping Campden in 1902. You can find out more at Court Barn Museum in Campden and by visiting Hart Gold and Silvermiths at The Guild, Sheep Street where they still create beautiful pieces in their workshop.

There are many ways to explore the Cotswolds – by foot, bike, car or by taking a tour with local companies. Alternatively you could book a Tuk Tuk tour, a horseback ride or a trip on a steam train! The GWSR is a volunteer operated heritage railway based at Toddington. You can enjoy a ride along the 28 miles track between Broadway and Cheltenham.

https://www.cotswolds.com/ – more information of what to see and do in the Cotswolds

https://www.cotswoldsaonb.org.uk/ – information about the Cotswolds AONB

https://sudeleycastle.co.uk/ – castle and gardens in Winchcombe

You can find out more about which cookies we are using or switch them off in settings.

This website uses cookies so that we can provide you with the best user experience possible. Cookie information is stored in your browser and performs functions such as recognising you when you return to our website and helping our team to understand which sections of the website you find most interesting and useful.

Strictly Necessary Cookie should be enabled at all times so that we can save your preferences for cookie settings.

If you disable this cookie, we will not be able to save your preferences. This means that every time you visit this website you will need to enable or disable cookies again.