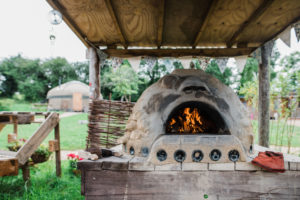 Bob is a very special feature at Campden Yurts so he deserves his own blog spot.

Having a Jamie Oliver inspired moment in 2015, Neill headed off onto a 1 day Cob Oven building workshop.

It was led by Matthew LLoyd of the Fabulous Cob Oven Company who runs 1 day and weekend workshops. Matthew quickly became a friend and came to lead a workshop for us at our Cotswold glamping site.

The idea was that I (Jane) would host the weekend, take the bookings and look after the guests. Matthew would teach up to 8 people how to build an oven – and we would get to keep it at the end! Awesome!! 👌 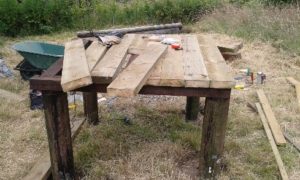 We needed a sturdy base and Neill built one out of old telegraph poles and planks. Then I went down to the local hotels/pubs asking for about 50 empty wine bottles (didn’t feel daft at all – honest). We  needed these bottles as insulation for the base.

In May 2015, we hosted a weekend workshop for 8 people including children.

Some came with their family and stayed in our yurts, some stayed locally and others were local.

We had a great time and learnt a lot, laughed a lot and ate quite a lot too.

The groundsman on the site at the time used his JCB to dig out some clay soil ready to use. This was a really clever move as digging out clay by hand is seriously heavy/laborious work! We used this clay to mix with sand and water and later straw to create the cob. 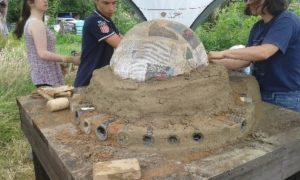 We achieved the shape of the oven by mounding up the sand into the right shape/height. Once it was right we added a layer of newspaper.

Next came the challenge of making the cob. This is hard work and involved lots of foot/welly work to mix the sand with the clay and water. Our willing helpers danced, stamped and marched that cob into submission so it could be applied to the mound.

It was lovely to see the kids get so involved and getting stuck in at every stage.

On day 2 the mound was finished, the internal sand removed and the final shaping done. 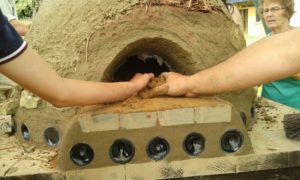 And then…drum roll…we got to light him. 🔥 This helped to dry out the cob and teach us how to light/maintain the oven.

Finally got to cook the first of many awesome, delicious pizzas in him! Since then, Bob has cooked about a 1,000 pizzas for our guests and family! 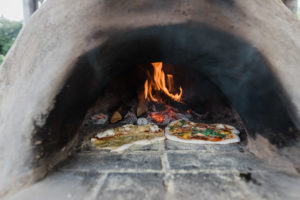 We use cookies on our website to give you the most relevant experience by remembering your preferences and repeat visits. By clicking “Accept All”, you consent to the use of ALL the cookies. However, you can use "Cookie Settings" to provide a controlled consent.
Cookie SettingsAccept All
Manage consent

This website uses cookies to improve your experience while you navigate through the website. Out of these, the cookies that are categorized as necessary are stored on your browser as they are essential for the working of basic functionalities of the website. We also use third-party cookies that help us analyze and understand how you use this website. These cookies will be stored in your browser only with your consent. You also have the option to opt-out of these cookies. But opting out of some of these cookies may affect your browsing experience.
Necessary Always Enabled
Necessary cookies are absolutely essential for the website to function properly. These cookies ensure basic functionalities and security features of the website, anonymously.
Functional
Functional cookies help to perform certain functionalities like sharing the content of the website on social media platforms, collect feedbacks, and other third-party features.
Performance
Performance cookies are used to understand and analyze the key performance indexes of the website which helps in delivering a better user experience for the visitors.
Analytics
Analytical cookies are used to understand how visitors interact with the website. These cookies help provide information on metrics the number of visitors, bounce rate, traffic source, etc.
Advertisement
Advertisement cookies are used to provide visitors with relevant ads and marketing campaigns. These cookies track visitors across websites and collect information to provide customized ads.
Others
Other uncategorized cookies are those that are being analyzed and have not been classified into a category as yet.
SAVE & ACCEPT