The National Trust and English Heritage offer a number of local places to visit. Visit their website to find out details of each property and opening times/access.

We have noted down just a few of the local places with a brief description taken from the National Trust website.

Places to visit in the Cotswolds 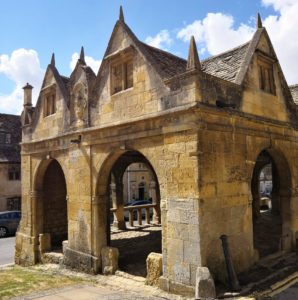 The Market Hall and Dover’s Hill in Chipping Campden are both owned by the National Trust but are free to enter and enjoy.

Hidcote is an Arts and Crafts garden in the north Cotswolds. It is just a stone’s throw from Chipping Campden and 20 minutes drive from Stratford-upon-Avon. Created by the talented American horticulturist, Major Lawrence Johnston its colourful and intricately designed outdoor ‘rooms’ are always full of surprises. It’s a must-see if you’re on holiday in the Cotswolds.

Once a Cistercian abbey, founded in 1246 by Richard of Cornwall and dissolved Christmas Eve 1539, Hailes never housed large numbers of monks but had extensive and elaborate buildings.

It was financed by pilgrims visiting its renowned relic, ‘the Holy Blood of Hailes’ – allegedly a phial of Christ’s blood.

Chastleton House was built between 1607 and 1612 by a prosperous wool merchant as an impressive statement of wealth and power.

Owned by the same increasingly impoverished family until 1991, the house remained essentially unchanged for nearly 400 years as the interiors and contents gradually succumbed to the ravages of time.

With virtually no intrusion from the 21st century, this fascinating place exudes an informal and timeless atmosphere in a gloriously unspoilt setting. We do not have a shop or tea-room, so you can truly believe you have stepped back in time.

Chedworth Roman Villa was rediscovered by the Victorians over 150 years ago. Leading the way in archaeology and conservation, Chedworth provides a unique insight into life during the Roman period in Britain.

A modern conservation building provides exceptional access to the extensive mosaic floors, hypocaust systems and bath house rooms. And a small museum houses a range of finds and artefacts from the villa.

Bibury, on the banks of the River Colne, is rich in both history and nature.  The cottages along Arlington Row are believed to have been built around 1380 as a monastic wool store and later converted into weavers’ cottages in the 17th century.  They are owned by the National Trust and are private homes, except for No. 9 which is now in use as a holiday cottage.  There is no public access to the cottages or their gardens.

We use cookies on our website to give you the most relevant experience by remembering your preferences and repeat visits. By clicking “Accept All”, you consent to the use of ALL the cookies. However, you can use "Cookie Settings" to provide a controlled consent.
Cookie SettingsAccept All
Manage consent

This website uses cookies to improve your experience while you navigate through the website. Out of these, the cookies that are categorized as necessary are stored on your browser as they are essential for the working of basic functionalities of the website. We also use third-party cookies that help us analyze and understand how you use this website. These cookies will be stored in your browser only with your consent. You also have the option to opt-out of these cookies. But opting out of some of these cookies may affect your browsing experience.
Necessary Always Enabled
Necessary cookies are absolutely essential for the website to function properly. These cookies ensure basic functionalities and security features of the website, anonymously.
Functional
Functional cookies help to perform certain functionalities like sharing the content of the website on social media platforms, collect feedbacks, and other third-party features.
Performance
Performance cookies are used to understand and analyze the key performance indexes of the website which helps in delivering a better user experience for the visitors.
Analytics
Analytical cookies are used to understand how visitors interact with the website. These cookies help provide information on metrics the number of visitors, bounce rate, traffic source, etc.
Advertisement
Advertisement cookies are used to provide visitors with relevant ads and marketing campaigns. These cookies track visitors across websites and collect information to provide customized ads.
Others
Other uncategorized cookies are those that are being analyzed and have not been classified into a category as yet.
SAVE & ACCEPT